First, you must understand a very IMPORTANT NUMBER.  According to the MHSAA, 14% of member schools are private schools.  That makes the following numbers proof positive that there is an unequal playing field in MHSAA tournaments.  If you think the MHSAA should change the playoff structure, sign the Fair Playoffs Petition, or better yet, get your school board to pass the Fair Playoffs Resolution.

All Sports (Data inclusive of the winter 2019 fall sports season)

Double check my math on the Raw Data page.

Proponents of maintaining status quo for the MHSAA playoff system, where private schools represent just 14% of all schools but win 30% of the state championships, often cite Michigan’s School of Choice law as a reason they believe the current playoff system is fair.  However, a comprehensive look at the data debunks that assumption.

In 1996, Governor Engler signed the first School of Choice law in Michigan. The law allowed students to move within their intermediate school district. In 1999, that law was expanded to allow students to move to districts outside their intermediate school district.  In the year 2000, our baseline year for the Fair Playoffs initiative, 26,025 students were School of Choice students.  In 2009, the number of School of Choice kids at neighborhood public schools or charter schools was over 240,000, by 2015 that number ballooned to over 275,000 students, 23% of all public school kids.  However, as School of Choice has increased, private schools have begun winning a greater share of state championships.  The lowest rate of championships won by private schools was 20% in 2002, while the highest rate was 41% in 2017, the last year that we have complete data.  If we look at the 5 year trends since the year 2000, private schools won 26.4% of state titles, whereas in the most recent 5 year period private schools won 33.2% of state titles.

While we cannot be sure about why private schools are winning more than double the number of titles they should be winning statistically, and while we don’t know why that number is accelerating, we do know that the current system is outdated.  We have access to more information than ever.  We are capable of using multiple variables to solve complex problems.  Yet, the MHSAA continues to use just one variable, enrollment, to determine playoff groupings.  While kids have School of Choice, school districts are stuck with the complacent Michigan High School Athletic Association, who has a monopoly on the high school playoffs in Michigan.  It appears the only way to get the MHSAA to change, short of legislative action, is for a critical mass of school districts to pass the Fair Playoffs Resolution.  On behalf of public school children, please ask your school board to support this resolution and send a copy to us and directly to the MHSAA. 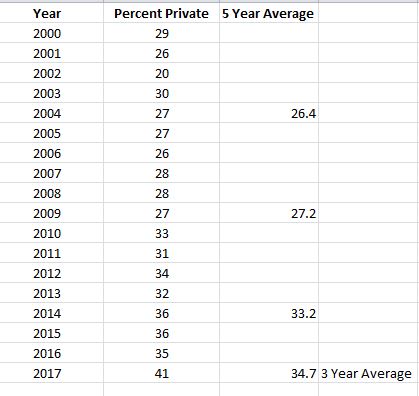 Percent of State Championships won by Private Schools since 2000

Too often when we discuss why private schools are winning 2 to 3 times as many state titles as they should statistically, the debate becomes personal and people chime in with their anecdotal evidence.  The most common complaint I hear from supporters of playoff fairness is that private schools recruit, and private school parenst can afford pricey summer camps and private lessons.  The most common defense I hear from those who want to keep things status quo, often people association with private schools, is that this is just “sour grapes” and that teams that don’t win titles need to get better coaches and get their players to work harder.  Those statements are often insulting depending on whose ears they fall on.  In reality, there are a lot of reasons that this imbalance  occurs.

The “why” is disputable, the fact that an imbalance is occurring is not. Therefore, the “why” distracts us from the “what.”  What are we going to do about this?  Those of us that support a fair system need to spend our energy lobbying the MHSAA, member schools, informing the public, and encouraging the coaches association and other entities to join us on this journey.  If you want to help, please approach your school board and ask them to sign the Fair Playoffs Resolution. Also, be sure to sign our online petition.